When Jan van Riebeek arrived in the Cape in 1652 as an employee of the Dutch East India Company he was tasked with starting a vegetable garden which would provide much needed fresh produce for ships rounding the Cape of Good Hope to get to the East.

Over the past three centuries the Company’s Gardens have gone through various reincarnations, from vegetable garden, to botanical garden to Victorian pleasure garden but in 2015 they have undergone a renaissance and are once again becoming a hub of social activity and a living green lung in the same way that Central Park is to Manhattan. It is here that the past has caught up with the present to create a wonderful integrated space in the heart of South Africa’s Mother City.

With the spectacular backdrop of Table Mountain, no visit to Cape Town is complete without a leisurely stroll through these tranquil, elegant and historic gardens, which have become a destination in themselves. For the first time visitor the obvious starting point to take a self-guided walk is at the bottom of Government Avenue – a pedestrian zone filled with tame squirrels (you can buy nuts to feed them)- and oak trees flanked by water irrigation channels dating from the original market garden. Government Avenue starts at St Georges Cathedral and ends at the Mount Nelson Hotel, the gracious pink ice-cream colonial hotel nicknamed ‘The Nellie’. Other hotels such as the Protea Fire and Ice and Cape Town Hollow are all within walking distance.

There are few places in the world where you can stand and survey the offices of 3 Nobel Peace Prize winners, but here opposite the Houses of Parliament where Nelson Mandela and FW De Klerk worked and across the way from Archbishop Tutu’s St George’s Cathedral, is one such place. South Africa’s history is reflected in the nearby Iziko Slave Museum where you can find unexpected treasures such as the original table where the abolition of slavery was signed into law. Outside there are statues of General Jan Smuts and Queen Victoria stands demurely outside parliament in what was once her realm. Cecil John Rhodes too stands erect in the garden pointing northwards to Cairo envisaging British dominion.

As you stroll up Government Avenue established in 1670 with the Company Garden’s on your right you will come to a sign pointing to Tuynhuis – meaning Garden House – used by the President on State occasions and for receiving foreign dignitaries.

The garden is very well signposted and has also become a free Wi-Fi zone. Even the trees have markers and are fascinating e.g. a Rubber tree from India or Ginko tree from China. The Saffron Pear tree which is propped up by steel and still bears fruit is the oldest tree in the garden said to date back to the early Dutch settlement and believed to be the oldest cultivated tree in South Africa.

If you were to continue up Government Avenue you would find the South African National Gallery which houses collections of South Africa, African, British, French, Dutch and Flemish art on your left and on your right further up the Iziko South African Museum and Iziko Planetarium. For bird-lovers, there are more than 22 bird species to be found in this tranquil hub.

Recently the management of the Company Garden’s has been greening more areas and re-establishing a vegetable garden as part of a move to provide skills transfer and improved food security whilst educating the population on the need for urban food gardening. This working vegetable and herb garden contains an edible indigenous plant and medicinal garden and has been laid out in the original Dutch quadrant layout of the Company’s Garden.

In addition, the old tearoom has had a facelift and has been taken over by a top restaurant consortium. It is now a sought after, popular spot for a meal of fish and chips, burgers or to meet for tea and cake. It is a very child friendly spot with an outside play area and relaxing designer chairs like weavers’ nest to have an afternoon nap.

Visitors are encouraged to spend at least a morning discovering the treasures in this garden in the centre of Cape Town and at the historical heart of the city.

Lauded, and understandably so, as one of the greatest wildlife shows on earth, if not ‘the Greatest Show on Earth’, sure to leave you in utter awe and absolute amazement, the annual Wildebeest Migration of East Africa, or ‘the Great Migration’ … or simply, ‘the Migration’ … is without doubt,…

Editor's note:  Charlie Ratcliffe is one of Cape Town's best tour guides but truth be told his heart is happiest in the wilderness.  Here is a recent account of an enviable Tanzania safari.  Since a child, I had heard of a vast expanse of African wilderness where the great herds… 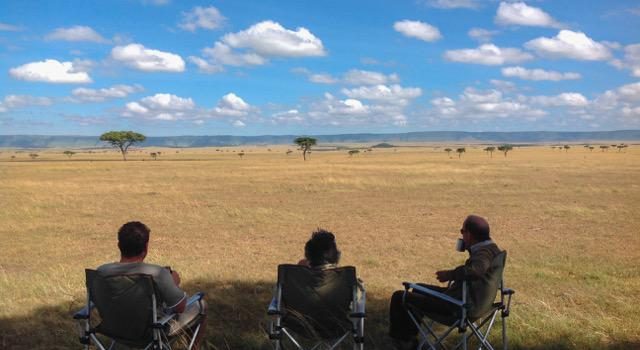