Located in the far northeast corner of Botswana, Chobe National Park is blessed with some of the most abundant wildlife in Africa. The second biggest national park in Botswana, Chobe National Park offers a wide range of accommodation options ranging from budget-friendly family options to luxurious lodges and camps. Chobe is also great to combine with a visit to Victoria Falls and the nearby Okavango Delta, which are both easily accessible from there.

Although Chobe is great all year round, it’s best to avoid the wet season that runs from February through to April. Either side of that offers fantastic game viewing opportunities that are amongst the best in the world. Famed for having the largest concentration of African elephants in Africa – estimated to be around 30 000 animals – Chobe National Park is the best place to witness these majestic animals.

The rest of the Big Five also call the park home and large prides of lion have been known to hunt elephants at the peak of the dry season. The annual zebra migration also passes through Chobe National Park – truly an amazing sight.

Chobe is divided into several sub regions, all offering something different. The Chobe region near Kasane is downstream of the Chobe River, and is the most popular and most accessible. For this reason, the area boasts some of Botswana’s best lodges. With the Chobe river is at it’s widest here, the area is a mix of forests, floodplains and sand ridges. Upstream of Kasane are the Savuti and Linyanti regions, which are less accessible, more secluded swamplands. Savuti is particularly abundant in game during the summer months when massive herds of zebra and wildebeest migrate there from drier regions.

Whether as a standalone destination or as part of a combined tour to the Okavango Delta, Victoria Falls or the Makgadigadi Salt Pans, Chobe provides the unmistakable feeling of enchantment that only untouched Africa can. With incredible sunsets that bathe the Chobe River in warm hues, almost unrivalled game viewing and some of the best lodges in Africa, Chobe National Park is the jewel in Botswana’s crown. 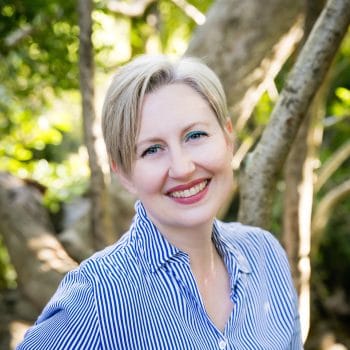 For a mobile tented safari experience with a difference, &Beyond Chobe Under Canvas ticks all the boxes. Experience the luxury of the carefully chosen campsites, .../

Chobe Savanna Lodge is the perfect escape for honeymooners, anglers and those seeking a classic African savanna location that offers sweeping views from its open-sided .../

The Zambezi Queen is a 45 meter long 5 star houseboat featuring 14 luxury cabins complete with an entertainment deck and a dining room with .../

There can be few wildlife experiences more rewarding than a game-viewing safari by luxury houseboat down the Chobe River in Botswana’s world-famous Chobe National Park, .../ 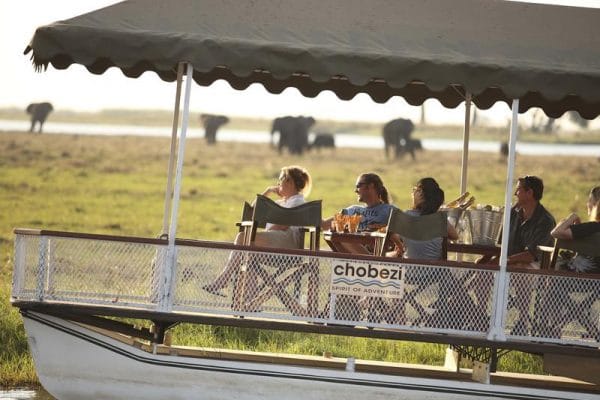 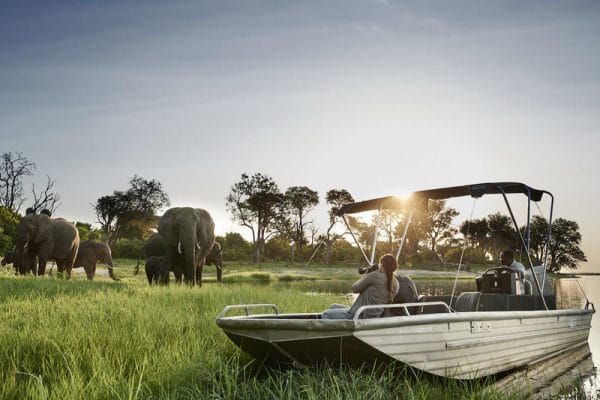 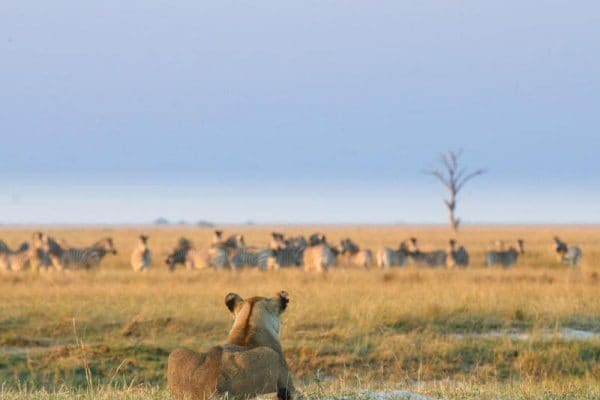 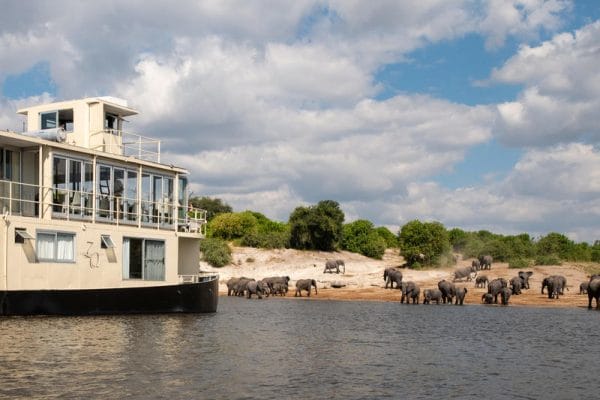 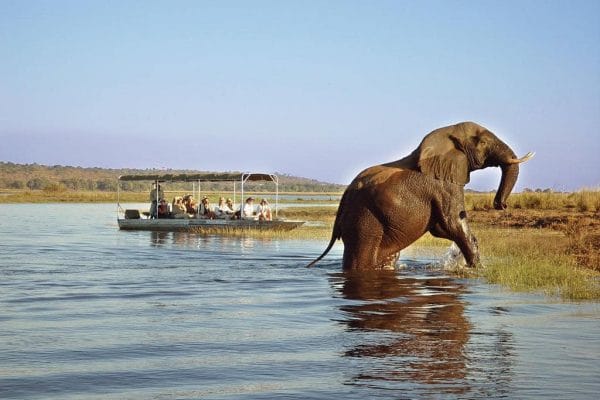 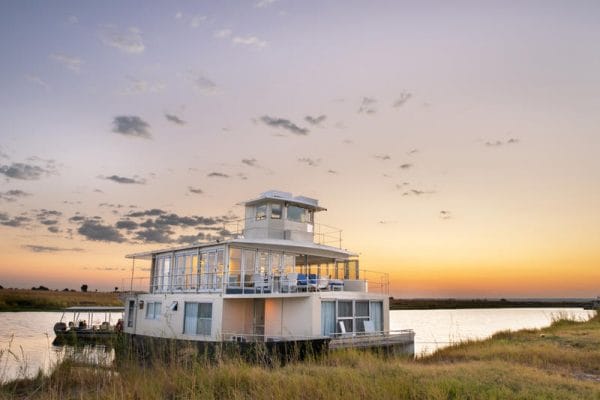 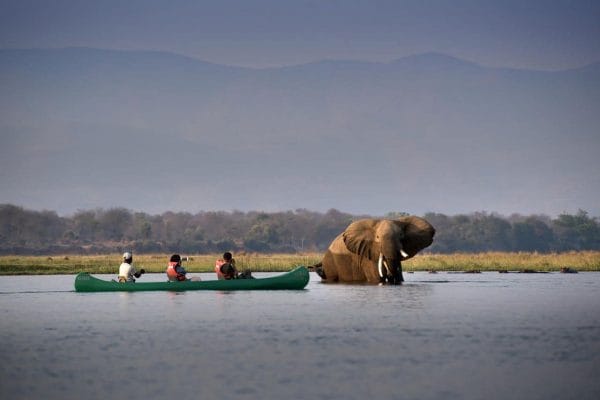 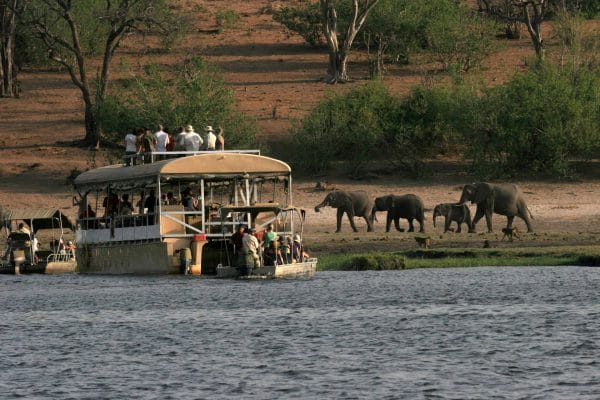 For a mobile tented safari experience with a difference, &Beyond Chobe Under Canvas ticks all the boxes. Experience the luxury of the carefully chosen campsites, …/

There can be few wildlife experiences more rewarding than a game-viewing safari by luxury houseboat down the Chobe River in Botswana’s world-famous Chobe National Park, …/

Chobe Savanna Lodge is the perfect escape for honeymooners, anglers and those seeking a classic African savanna location that offers sweeping views from its open-sided …/

Newlyweds will enjoy a special 25% discount on the bride’s stay on either the Zambezi Queen or the Chobe Princesses.

Includes:  bottle of bubbly, a gift and a romantic turndown.

SO MANY PEOPLE WE MET HAD BEEN TO AFRICA MULTIPLE TIMES. I CAN CERTAINLY SEE WHY!

Overall, this has been an extraordinary experience! I already wish we had a few more days.

THE ELEPHANT SAFARI WAS A THRILL!

We enjoyed each of the areas and the animals that we were able to see.  The transfers were on time and smooth.  Guides were pleasant …/

To sum it up- our trip was outstanding and exceeded all of our expectations. Thank you so much for being so wonderful to work with …/

From price: USD12,746Duration: 17Travel Style: Beach & Safari Vacations, Luxury Big Five SafarisDestinations: South Africa, Zimbabwe, Botswana, Mozambique
Arrive at the Table Bay Hotel which has magnificent views of Cape Town’s famous Table Mountain and is conveniently located in the heart of the V&A Waterfront. Enjoy guided day tours of the city and surrounds. Transfer out to the Winelands and stay in picturesque Franschhoek, the gourmet capital of South Africa. Fly into the Okavango Delta, Botswana’s Garden of Eden. Enjoy land and water-based safaris in this wildlife-rich region. Then it's a light air charter across to experience the Victoria Falls for 2 nights before flying on down to the Kruger area for 3 nights on a thrilling Big Five safari staying in a luxury tented camp. End your extraordinary journey relaxing at a beach lodge on an island in Mozambique.

Rooms: 13Rating: Type: HouseboatsSpoken Languages: EnglishSpecial Interests: Adventure, Big 5, Birding, Fishing, Flora, Indigenous Culture Art, Leisure, Star Gazing, Wildlife, WineLocation: Botswana
There can be few wildlife experiences more rewarding than a game-viewing safari by luxury houseboat down the Chobe River in Botswana’s world-famous Chobe National Park, where Zimbabwe, Zambia, Namibia and Botswana meet. Floating down this magnificent river allows unparalleled access to the game so prolific this pristine African wilderness. Chobe is home to the world’s largest elephant population and teems with African game, including the Big Five and the endangered African wild dog, while birders can tick off up to 450 bird species. The luxurious houseboats depart near Kasane, within travelling distance of one of the great wonders of the world – the magnificent Victoria Falls.

Rating: Style: Safari HoneymoonsType: HouseboatsLocation: Botswana
The Zambezi Queen is a 45 meter long 5 star houseboat featuring 14 luxury cabins complete with an entertainment deck and a dining room with uninterrupted views  of the surrounding riverine wilderness. It offers visitors the newest and most luxurious houseboat experience currently available on the Chobe River. The Zambezi Queen can be seen gliding quietly down the Chobe River between Botswana’s Chobe National Park and Namibia’s Caprivi Strip.