I have visited too many special places on this planet to say I have an absolute favourite, but if really hard pressed, I could doubtlessly say I have a soft spot for a couple, one of them being Namibia.

Namibia is a paradox; the ruggedness of much of the land, contrasted by the kindness of the people, the barrenness of the Namib Desert, which somehow still sustains life and nurtures a fragile environment, the harshness of the red crescent dunes juxtaposed against the boundless beaches and steely blue of the Atlantic ocean.

And nowhere is this more apparent than in Swakopmund, where you arrive to the town with relentless orange sands to one side and cool cresting waves on the other.

Where the Namibian desert meets the Atlantic Ocean Swakopmund is an historical town with German heritage, the European architecture quite apparent in amongst the newer more modern buildings.

A wander around this charismatic town, established in 1892 as the main harbour of German South West Africa, will uncover it’s historical legacy, and a little drive will leave you surprised at the houses built at the very, very edge of the endless dunes, and just about on the rocks of the ephemeral Swakop river riverbed.

The Namib desert is literally on the front door step(s) of Swakopmund!

The town’s colonial landmarks include the Swakopmund Lighthouse and The Mole (an old sea wall), and next to the lighthouse, the Swakopmund Museum documents Namibian history.

For the duration of our whistle-stop stay in Swakopmund we were fortunate enough to be ensconced at Strand Hotel Swakopmund, which is enviably positioned right on the waterfront at The Mole, and also within easy walking distance of  just about everything. Intended to be a harbour wall, which over a five year period entirely silted up, the Mole is today a tranquil beach ringed with museums and restaurants, and seems the ‘happening’ place to be.

The location of the Strand Hotel Swakopmund is ideal for a leisurely stroll along the promenade, or for those (like myself), who (over-)indulged just a tad in the fabulous food, a run along the seafront.

Although the establishment comprises 125 rooms, the hotel is well designed and does not feel big; as it should be, the entire tendency of the hotel is toward the sea.

The decor is light and bright, and comfortably contemporary; the rooms are tastefully appointed, and include extra length beds, crisp linens, and all up-to-date amenities. Rooms, like the rest of the hotel, are very well maintained.

The hotel boasts a most agreeable selection of restaurants; a seafood and oyster restaurant, the Ocean Cellar, the Brewer & Butcher, a meat and beer-oriented eatery, and the Farmhouse Deli, a deli-café style bistro, all of which we managed to dine at in our short stay.

All three eateries are sea-facing (as is the hotel lounge), and offer terraces with great views of the promenade and the ocean – absolutely fabulous for relaxed dining, for people watching, or for simply sitting and staring.

The food at all restaurants is excellent, my partner is a meat eater and he partook of the game of the day at the Brewer & Butcher, which he announced exceptional. Our meals at the latter restaurant were accompanied by the hotel’s very own craft beer, brewed in gigantic copper vats on site.

Equally as good as the restaurants, are the staff, who really are efficient, friendly and cheerful, not only at the restaurants, but throughout the entire hotel, everyone an absolute pleasure to interact with.

The town is great for a stopover or for a longer visit, comfortable, safe, relaxed … in terms of accommodation and a departure point for all the area has to offer, the Strand Hotel Swakopmund, definitely is the place to stay.

Our drive around the town morphed into a mini road trip, which took us north towards the well-known fishing destination of Henties Bay, the unmarked salt road stretching some 75 kilometres into the horizon.

To some the road may seem slightly boring, to me, the starkness is it’s charm.

The miles are also interjected about half way between Swakopmund and Henties Bay by the oddity of Wlotzkasbaken … which appears like a mirage in the distance … and roosts between the road and the beach … like a Lego village … on the moon!

Founded as a holiday angling spot in the 1930s, Wlotzkasbaken developed into a settlement of unusual design; without walls or fences, and comprising some idiosyncratic architectural enterprise … the smattering of undeniably curious houses looks like an abandoned lunar colony.

We spent a fair amount of time exploring this quirky hamlet; I was and remain utterly charmed.

In terms of activities, adventures, and day trips, Swakopmund and surrounds has much to offer visitors. Amongst many other, we could have chosen a Messum Crater tour, fishing excursions, Namib Desert night walks, living desert tours, sand-boarding, quad biking, golf at Rossmund Desert Golf Course, scenic desert & Atlantic Ocean flights, cultural township tours, the options were just too many for our tight schedule.

Forget Game of Thrones, National Geographic viewers are in for a treat with the latest film from renowned wildlife documentary filmmakers Derek and Beverly Joubert entitled ‘Game of Lions’ to be shown world-wide as part of their ‘Big Cat Week’. Filmed at Botswana’s Duba Plains Camp and the Selinda Reserve…

The "greatest show on earth" is under way once more as East Africa's Great Wildebeest Migration moves from Tanzania's northern Serengeti across the Mara River to the Masai Mara in neighbouring Kenya. And this year you're able to be there and witness this incredible wildlife spectacle with one unusual caveat… 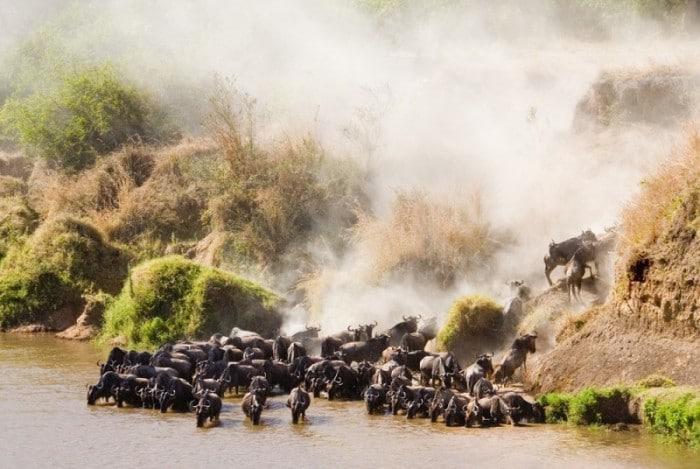 By now we’re all familiar with the concept of the proverbial 'bucket list' ‐- "amazing things to do before you shuffle off your mortal coil" ‐- but when it comes to African safaris, we prefer to veer away from the usual, predictable bucket list inclusions - and go deeper. Much…