This summer, Botswana was hot and dry. The 2019 summer rains were not as plentiful as previous years, and unfortunately the rainfall in the Angolan highlands was below average too.  As a result the annual flow of water into the Okavango Delta has been late. Word on the ground  in Botswana is that the famous flood water that originates in the mountains in Angola and flows slowly and steadily into the Delta, is way below normal this year.

It is important to note that boating and mokoro excursions at some camps and lodges will not be possible this 2019 safari season.
Of course experiencing the Okavango from a mokoro is on most people’s bucket list, and some travellers are bound to be disappointed to find this activity has had to be suspended due to the lower water levels. We trust that travellers will understand that true nature is unpredictable and variations occur each and every month and year in the Okavango Delta.

Some camps have proactively moved their boat stations to an area that has easier access to the surrounding deep water channels, which will be used until the water levels increase. For now, camps that are located on the edge of a lagoon or a deep channel are still able to offer boating activities. 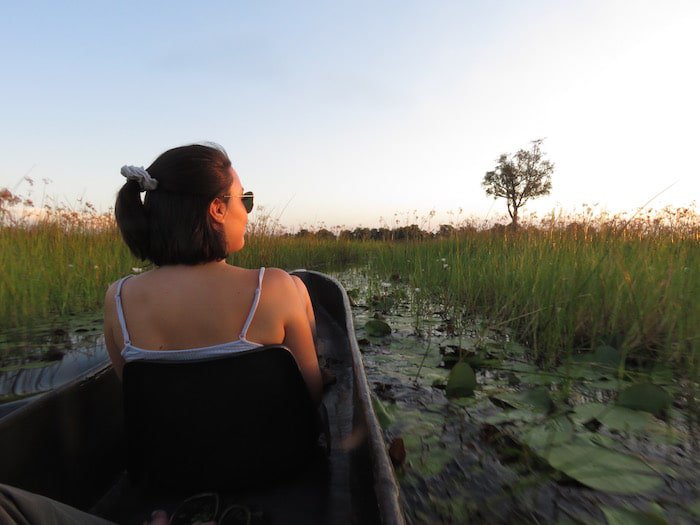 What we can say is that as a result of the scarceness of water sources, the concentration of wildlife is exceptional. There have been amazing sighting of  lion, hyena, leopard and cheetah, while wild dogs have been seen along with herds of over 1000 buffalo.  Naturally all of the grazers are there sipping from the waters edge and eating the grasses in the channels.  This year water will be scarce, but game will be plenty. It is a safari-goer’s paradise!

Water levels in the Okavango are extremely low this year. Mokoro safaris are only possible at certain camps and lodges

As a parent whose job is to intimately know Africa like the back of my hand, I travel throughout the continent, exploring each of our destinations by experiencing the wildlife, communities, reserves and lodges with a keen and experienced eye for the details that matter – like a passionately ruthless commitment to conservation, community…

While Capetonian winters can be really stormy and rainy (it’s not called the Cape of Storms for nothing!) this city is often blessed with the most glorious, sunny spells. But what do you do when you’re in the Mother City and your day is set to be a total washout?…