Once known as the five wild animals that were the most challenging and dangerous to hunt on foot in Africa, the Big Five thankfully are now the five animals that most people want to see when on an African safari, with the only ‘shooting’ coming from their clicking cameras.

Originally coined by the ‘great white hunters’ of the 19th and early 20th centuries who sought to collect these animals as trophies, the Big Five referred to the African elephant, lion, leopard, Cape buffalo and the black or white rhinoceros.

In those days it was fashionable for seasoned travelers, heads of state or important personalities to come to Africa to participate in a hunt of these large animals. For the record, we do not condone any form of hunting at all. But thought it would be fun to highlight some of the interesting facts and habits of the Big Five.

Elephants are not only the largest living land animal (the biggest elephant ever recorded weighed 24,000 pounds and measured 13 feet), but they are interestingly enough very similar to humans in that they have the ability to exhibit emotion. For example, when Lawrence Anthony (also known as the ‘elephant whisperer’) died on his KwaZulu Natal game reserve, a herd of elephants arrived at his home to mourn his death like they would one of their own.

Elephants also have an incredible sense of smell, rumored to be the best in the animal kingdom and have the ability to hear each other’s trumpeting calls from a distance of up to 5 miles. They are highly social animals with a female matriarch leading the herd. And just because of their enormous size don’t think that you can outrun them if they charge; an elephant can quickly reach speeds of up to 40 km per hour.

These gentle giants can be found all over Southern Africa, so the good news is that on most safari tours you’ll most likely see these magnificent creatures. The bad news is that sadly around 96 elephants are killed in Africa every day for their ivory.

Probably the most prehistoric-looking animal found in the animal kingdom today, the rhinoceros has existed for millions of years and is now sadly one of the most endangered species due to the present day poaching threat.

The rhino is the second largest land animal, and Africa is home to both the white and black rhinoceros. The white rhino got his name from the Dutch settlers who referred to its broad, flat lips perfect for grazing as ‘wyd’ (wide), which later misleadingly became written as ‘white’. Because it grazes on thick, tough grass it needs to drink at least once a day in order to digest its food.

The black rhino (which is now one of Africa’s most critically endangered animals) was the preferred choice for big game hunters, perhaps due to its smaller size and more solitary nature. Its beak-shaped lip is more adapted to browsing, and it’s considered more dangerous than its ‘white’ counterpart due to its volatile temperament.

The horn of a rhino has a similar keratin structure to the hooves of a horse and can grow back if it breaks off. In Asian countries (such as Vietnam) a large rhino horn is valued at as much as one quarter to a half million dollars.

An animal on everyone’s wish list is one of Africa’s most elusive, yet most beautiful and charismatic animals, the leopard.

Solitary by nature, and mostly seen between sunset and sunrise, the leopard is one of Africa’s most accomplished predators and a master stalker. They often drag their prey up into trees (which can weigh as much as their own body weight) to avoid their kill being stolen by other predators such as hyenas and lions.

Classified as ‘near threatened’ the leopard is on par with the white rhino when it comes to how endangered this species is.

It hardly seems plausible, but the buffalo is considered the most dangerous of the Big Five, killing more hunters in Africa than any other animal!

Buffalo have developed incredible hearing which alerts them to danger and helps them find water and food. They don’t fight over territory but will fight for rank. It’s estimated that the impact of the clashing of their horns is equal to that of a car colliding with a wall at 50 km per hour.

With regards to its conservation status, the buffalo is the least endangered animal out of the five but is nonetheless going through a population decline.

Last but certainly not least, is the lion, possibly the animal that most visitors yearn to see on their African safari. In days gone by, the lion was also the most-sought after challenge for the trophy hunter.

Extremely powerful, sleek and majestic, lions have no natural enemies other than man. They are the only big cats to live in a pride, usually numbering five to fifteen members consisting of a dominant male and several females.

The lionesses do most of the hunting, even though the males eat first, with the male lions defending the pride’s territory at all costs. In stark contrast to elephants who only sleep two to three hours per day, lions can sleep up to 20 hours!

Once roaming Africa in their hundreds of thousands, conservationists today believe that their numbers have dwindled to between 25,000 to 30,000 animals, mostly living in sub-Saharan Africa.

Where To See The Big Five

South Africa is a great place to experience all of the Big Five. Visit the exclusive private game reserves such as Londolozi or the vast Kruger National Park, and you have a good chance of ticking off all five. Even leopards are fairly predominant and your chances of seeing one of these elusive cats in the Sabi Sands Private Game Reserve is quite good.

Botswana is another incredible country for spotting four out of the magnificent five and although you may not see a rhino, this country prides itself on having immense numbers of buffalo and lion, Africa’s biggest elephant herds, and a thriving leopard population. Visit the Okavango Delta and the Chobe National Park, and you will be amazed at the buffalo, elephant and lion sighting any time of the year. Book your holiday to the Chobe River from August to late October, and you certainly won’t be disappointed – you can even see large elephant herds playing, bathing and crossing the river.

Tanzania is another country that is renowned for face-to-face encounters with the Big Five. Plan a trip to the Serengeti to see the migrating herds from November to July, and you will be sure to see the apex predators moving in behind the migrating plains game too. There are also more rhinos and elephant herds to see here, especially in the lush confines of the Ngorongoro Crater.

Visit Kenya and the Masai Mara for the incredible event of the wildebeest migration from August to November, and you’ll most likely see lion, buffalo and elephant herds.

Namibia is one of the best places to see black rhino in Africa, and if you visit the Etosha National Park you are sure to see plenty of lion and elephant, although there are no buffalo here.

Today experiencing these incredible animals first-hand in the wild is what a safari is all about. Anyone who has ever been out in the African bush will be able to recount the details of the moment and the thrill of the first time they heard the deafening roar of lions at night; watched a family of elephants having a sand bath; came across a rhino mother and her calf cooling off under a tree; witnessed a herd of grazing buffalo in the reeds of a dry riverbed or caught even the briefest glimpse of a leopardess on the hunt. This is truly the magic of the Big Five experience.

The hippopotamus is one of Africa’s most loved and popular animals, along with the giraffe, elephant, zebra and lion. But did you know that they are, in fact, well-known as the Most Dangerous Animal in Africa? This is in part due to their deceptively ‘cute’ appearance, and the fact that… 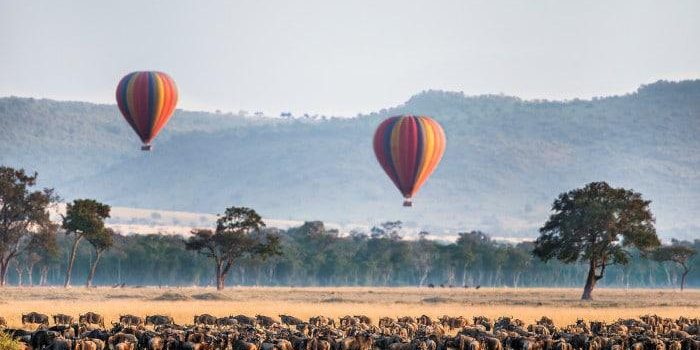 It’s no secret that most countries in Africa could use a hand or two when it comes to resources. Yes, there are large charity organizations like UNISEF that deal with this on a daily basis, but this is often a laborious and drawn-out process. What most travellers aren’t aware of…