There’s nothing more luxurious than taking a relaxing bath. After a long day on your feet or in an open Landrover on an African safari, dusted in Kalahari grit, the thought of melting into a pile of suds beats any five star spa pampering. “But spas have baths with lovely garden settings” you might argue. Well, imagine if we promised the ultimate garden – we’re talking about the wide-open expanse of the Savannah.

One of the most eye-catching features of these Southern Destinations’ chosen camps is the opportunity to take a bath in the middle of the African bush whilst on a wilderness safari! In bygone days of colonial safari travel, well-heeled travellers to Africa would be accompanied by an Abercrombie and Fitch portable canvass bath, and so there’s no reason you can’t travel in equal style.

Imagine the cool dusk breeze on your skin as you soak all your urban worries away and watch the sun set beneath an acacia tree, with the cicadas serenading you, as an emerging moon appears in clear view above. There would be some ‘peeping Toms’ to be sure: that owl peering down at you, a few embarrassed Vervet monkeys shielding their eyes and the Bushbabies oggling you as you tease them with a cheekily exposed leg!  You can’t beat the unique experience of an al fresco bush bath.

So which camps provide such an experience?

With its emphasis on privacy and exclusivity, limited to just 6 guests, this villa is set aside from the rest of the camp and has one of the most romantic bathrooms with a choice of outdoor and indoor showers and baths.

Part of the Great Plains Conversation Project, this five star safari experience is located in the Selinda Reserve on an island in the flood plains of Zibadianja lagoon. It is completely private, with an abundance of wildlife, so watching the animals wander by whilst you brush your teeth is not an unusual occurrence.

This contemporary and unpretentious camp enjoys a private location in the Makalali Conservancy to the west of the Kruger National Park. Their bush bath is totally ‘delicious’. And the suites here have their own private plunge pools. Garonga is a great choice for intimate bush weddings.

This is the most rustic of the ‘bath camps’. Situated further north than the other camps, Kaingo Camp lies in an untouched area of Zambia, the remote South Luangwa Valley. The bath has a view of the river and the feeling of freedom and space.

Positioned on its own private deck, Pom Pom’s bath is partially shielded by the bush and trees. It has a great view of the river below. This private concession is situated on Pom Pom Island in the heart of the Okavango Delta on the Xudum river system. Game is plentiful and the landscape lush. The only company you’re likely to have while you sing in the bath are hippo and elephant.

If you want to see the Big Five (plus a wide variety of other animals and birds) in a malaria-free environment within easy access to Cape Town and the Garden Route then Shamwari is your best option.  Honeymooners will love the more exclusive tented Bayethe Camp or Eagles Cragg and families…

Although our holiday planning doesn’t always revolve around diving, we are keen divers and snorkelers, who are more often than not aware of the marine possibilities at our impending destination. Zanzibar (an island off the coast of Tanzania) is well known for its pearly beaches and sapphire blue waters, and before… 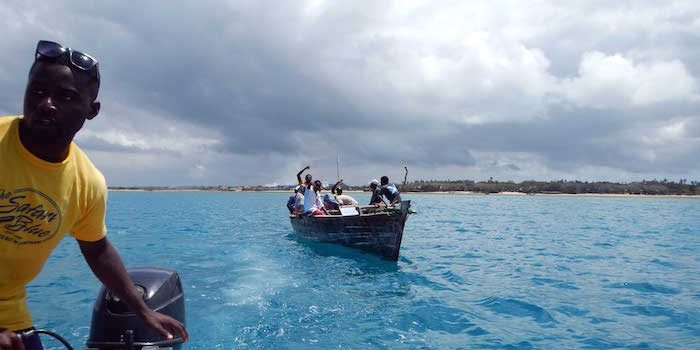